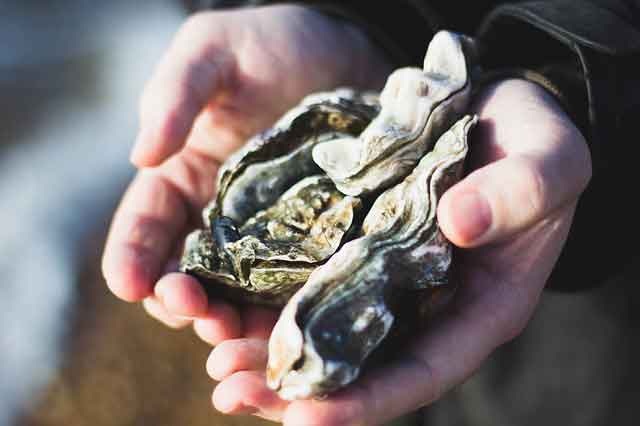 Water quality in coastal estuaries, bayous, creeks, and bays is not as healthy as it once was, mainly due to changes in the landscape.  When landscape changes from rural areas such as the Blackwater River State Forest to an urban area (such as downtown Pensacola), the quality of the runoff after rain events shifts from healthy (natural filtration through leaves and sand) to an impaired stormwater runoff which enters our creeks, bayous and bays after each rain event. Examples of pollution from runoff include oil and gas from vehicles, metals from car brakes, detergents, or lawn care chemicals to name a few.

How Oysters Can Help

Oysters can play a big role in improving our local waters.  Nutrient runoff, such as nitrogen, increases the growth of algae. When it dies and falls to the bottom, it decays. The decay process consumes oxygen, leaving the water with too little oxygen to support fish and other marine life. Oysters can remove nitrogen from the water like sheep grazing down a meadow. The fewer the algae, the more oxygen available for marine life.

We will place oyster cages on private docks throughout the smaller bayous within the Pensacola Bay System. The cages will be provided along with 75 oysters which will be counted, weighed, and measured before deployment. The project is based on the Oyster Gardening for Restoration and Education courses developed by the Chesapeake Oyster Alliance.

Students and citizen volunteers will collect and gather data to assist us with the project. Interested homeowners, individuals, or people wishing to sponsor a class or student must attend a 3-hour workshop. This will provide basic information on setting up and maintaining oysters under the best possible condition for your location.

Participants will receive an oyster cage, 75 oysters, a rain gauge, logbook, instructions about caring for the oysters, how to clean and maintain their cage, and a point of contact. Oysters will be grown out in cages for 9-12 months and returned for measurements. Adult oysters will be measured and weighed before being installed in a living shoreline project within the same water body. Interested participants can receive 75 juvenile oyster spats and begin the grow-out cycle again.

Oysters are a big part of our local ecology and found throughout various pockets along the northern Gulf of Mexico Estuaries and bayous. Oysters are natural filtering mechanisms which get their food and oxygen by pumping large quantities of water across their gills. During feeding, oysters take in phytoplankton, algae, bacteria, viruses, sediments, and chemical contaminants.  This increases water quality by reducing the amounts of contaminants, thereby promoting water clarity by reducing sediments. An adult oyster can filter approximately 35-50 gallons of water in a day under optimum conditions! Oysters create their own habitat by making oyster reefs, which offer protection, food, and habitat to many types of marine organisms.

Oysters are found throughout the Pensacola Bay system where salinities range from 8-25 parts per thousand (ppt) and spat collection may occur in various locations.  These oysters are known to colonize dock pilings, rock jetties, and other areas wherever there is firm footing to support their weight.

The growth rate of the spat may be as high as 10 mm/month (1/4 “). This rate will slow as the oysters increase with age. The spat will take on the contour of the cultch material and will begin to resemble an adult oyster in a short time.  Oyster growth is influenced by temperatures, salinity, food availability, and periods of exposure to air and population density. The Eastern oyster can live to be 25 to 30 years old.

The Bream Fishermen Association (BFA) is a well-known and highly respected organization which has assisted the city, county, state, and region as environmental stewards in protecting our northwest Florida and south Alabama waters for over 50 years. The BFA promotes environmental stewardship through water quality monitoring by implementing programs that educate citizens and students about how they can help improve the quality of our environment for all persons, plants and animals; from the headwaters of creeks to the Gulf of Mexico. Originally organized in the 1970s, the BFA worked closely with the newly formed University of West Florida, the US Environmental Protection Agency, and the Florida Dept of Health to identify and coordinate a monitoring program that continues to this day.


The Pensacola Bay Oyster Company was founded in 2013, when local Pensacola businessman and entrepreneur Donnie McMahon realized a need for premium Florida oysters. McMahon grew up in Pensacola and remembers when the Bay contained an ample supply of oysters. Hurricanes and the BP Deepwater Horizon oil spill have damaged wild beds, causing the local oyster growing market to dry up. For more information please visit https://pensacolabayoyster.com.

YOU CAN HELP CLEAN UP THE BAYS

Please join the BFA and the Pensacola Bay Oyster Company to clean up local waters by participating with living bio-filters, i.e. oyster cages on every dock. Seventy-five oysters filtering 50 gallons per day could make a difference at your dock. Oyster cages on each dock in a bayou could make a big difference for a whole watershed system.

Our program is in partnership with the Florida Fish and Wildlife Conservation Commission (FFWCC, FWC) which has the following mission: ‘Managing fish and wildlife resources for their long-term well-being and the benefit of people’ and teaming with SeaGrant and Institute for Food and Agricultural Sciences (IFAS) to insure the public is engaged in protecting their water quality and natural resources.

How to Hang your Oyster Cages